Renowned as the first place to hear the essential sounds of the year ahead, Live At Leeds returns in 2019 with its biggest lineup to date - bringing together the artists that’ll be on everyone’s lips for the next 12 months, and the chance to find your new favourite band first for a day of live music like no other. The home of new music, it all begins at Live At Leeds.

Heading up the lineup this year are some of Live At Leeds’ true success stories, led by returning guitar heroes Sundara Karma. Since forming in Reading, their blend of infectious hooks and direct lyrics have taken on the globe - with a debut album that took them to headline nights at London’s Brixton Academy and beyond. After returning last month with the mesmerising ‘Illusions’ and a hotly anticipated second album on the cards for next year, their set at Live At Leeds is bound to be an unmissable spectacle of what a band can be in 2019.

One of the most acclaimed and creative bands of the past decade, Metronomy will return in 2019 to open up a bold new chapter. Formed in the creative mind of frontman/band leader Joe Mount, their tear-stained lines of indie heartbreak have become a signature sound - with five studio albums morphing and growing into swaggering neon-pop with a catalogue of anthems to boot. An unmissable live act, Live At Leeds 2019 will be in for a treat when Metronomy come to town.

Tom Grennan is arguably the breakout artist of 2018, with an incredible year that has sent him to some of the biggest stages in the UK. After scooping a Top 5 Album with debut LP ‘Lighting Matches’, Tom has packed rooms across the country - with his gravel-smooth voice and unstoppable stage presence making him one of the most beloved songwriters that the UK has seen in quite some time. Bound to bring passion and charm to Live At Leeds 2019, he’s one only set to get bigger and bigger from here on out.

Across venues and locations around the city, Live At Leeds is full of unmissable moments - with a host of the finest in fresh and exciting music lining up for 2019. No comebacks in the indie world may be as anticipated for 2019 than Swim Deep, who across two studio albums have set themselves from the pack with their dreamy and boundary-pushing sound. After time away, you can guarantee their set at Live At Leeds 2019 will be one packed to the rafters as Birmingham’s finest return to the fray in style. An act stamping their own mark on the world around them, Dream Wife stand as a vital act of current times. Combining punk spirit, a take no prisoners live show and a revered debut album to boot and you can guarantee they’ll go down a storm come May 4th. Another band with a debut album recently out in the world, the glam-screen swagger of Black Honey returns to Live At Leeds next year, with tracks like ‘Midnight’, ‘Hello Today’ and ‘Dig’ making them a live force to be reckoned with. Equally as captivating, and standing as one of the most talked about new bands of the past few months, the carefree pomp of Sports Team will roll into Leeds City Centre in May, bringing with them the sort of ambition and star-power that’ll have them leading the way for a whole new gang of bands to follow. After their landmark Scala headline show and with the charismatic points of frontman Alex Rice in tow, they’re ones not to be missed.

On their return to Live At Leeds, Swim Deep commented:
“Buzzin for Leeds. New songs. Buzzin"

Always changing and with something different around every corner, Live At Leeds packs in a vast array of bands and acts reshaping genre and styles. Scrappy South-Londoners Goat Girl have made a name for themselves with their fresh and unique take on what a guitar band can be, and their forward-thinking but raw set is bound to provide a moment unlike anyone else. Dreamy four-piece Gengahr bring themselves to Live At Leeds as they continue to innovate and evolve, with second album ‘Where Wildness Grows’ released last year to acclaim across the board. After a star turn on Later… With Jools Holland, Leicester’s Easy Life will be rolling with the smooth jazz-indie vibes to Live At Leeds this year, with tracks like ‘Pockets’ and ‘Frank’ pointing to one of the most exciting new bands on the circuit right now. Shining a light on the best the city itself has to offer, Leeds’ very own Marsicans will be on hand to celebrate at Live At Leeds 2019 as they sit on the cusp of a huge year with their sharp and sweet pop hooks. Equally, the hypnotic flows of Gently Tender (featuring members of Palma Violets and The Big Moon) will leave Live At Leeds 2019 with an army of new fans thanks to their incredible sound. It’s a shining example of why Live At Leeds is the only place to be when it comes to refreshing new music discovery.

Hometown heroes Marsicans look ahead to Live At Leeds 2019, saying:
“We’re very excited to be playing at Live at Leeds next year. It’s given us some of our best hometown shows over the years and we can’t wait to take it up a level with this year’s performance. It’s always an exciting date in our calendar”.

The ultimate all-dayer, Live At Leeds remains unmatched as the leading light of live music and inner-city fun. Bursting at the seams with new bands all on the verge of something special, there’s something for everyone. From the soaring screens of Brighton’s Thyla, to the flickering panoramic plays of Another Sky (fresh from their recent TV debut on Later… With Jools Holland), the direct and heart-grabbing pop of Lauren Aquilina and the sharp Elli Ingram, the dazzling indie pop of Swimming Girls and the thriving rock and roll power of Scottish wizzes The Dunts - the very best are heading to Live At Leeds to prove their standings. With over 55 acts in total confirmed today, also including the Blossoms-approved Fuzzy Sun, Liverpudlian popper Zuzu, thrilling live kickers Saltwater Sun and the intricate yet open Squid - Live At Leeds is the only place to catch the hottest bands and artists of 2019 before anyone else.

The Dunts said:
“We’re very excited to play Live At Leeds festival next year, it’ll be our third time in Leeds after smashing Leeds Festival and LAL's Ones To Watch, and we are prepared to die on that stage! We realise no one wants that but we are prepared!”

Saltwater Sun said:
“Hi! We’re Saltwater Sun and we are all fired up for our initiation into the Live at Leeds Club 2019! Heard nothing but good things about this festival and having only ventured to Leeds once so far, we’re understandably super excited to play for some people who haven’t seen us. As for our set, expect loud, high energy bops from start to finish. Bring your dancing shoes; we’ll do the rest.”

The starting gates to the summer ahead, Live At Leeds 2019 soundtracks a city soaring with the best in new and now.

Looking ahead to Live At Leeds 2019, Festival Director Andy Smith said:
“It’s really good to see breakthrough artists coming back for 2019, both Sundara Karma and Tom Grennan cut their teeth at the event making their first appearances in 2016 and ‘17 respectively. They’ve both had a great few years, selling out Leeds Academy and enjoying critical acclaim since their last LAL appearances; it’s amazing to welcome them back topping the bill. We see Metronomy return to Leeds for the first time since 2014, which will be a personal highlight, and local talent is represented well with Leeds men of the moment Marsicans leading the regional names. There are emerging artists on this announcement with huge buzz around them at the moment like Easy Life, Heavy Lungs and Sports Team, and this is just the first wave of names, there is plenty more to be announced!

Tickets for Live At Leeds 2019 are on sale now, starting from £36 + Booking Fee - available from LIVE AT LEEDS 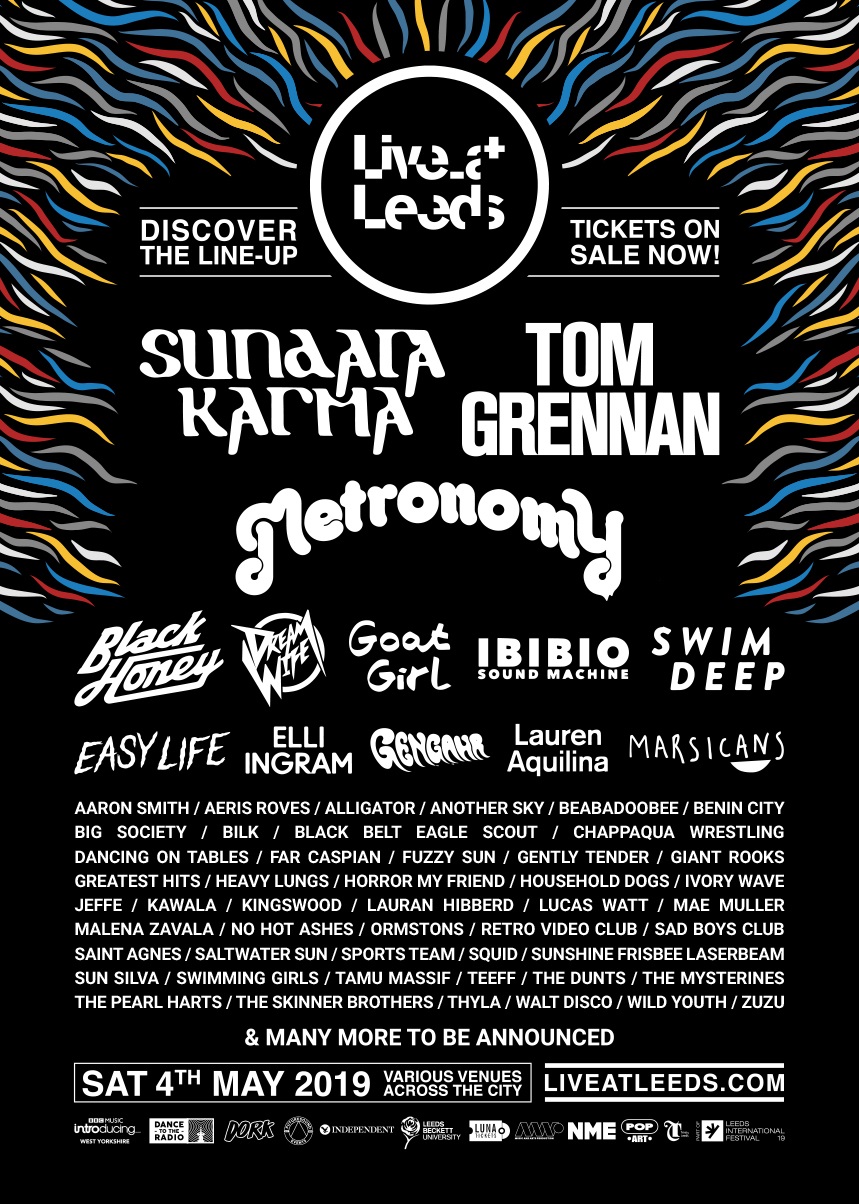